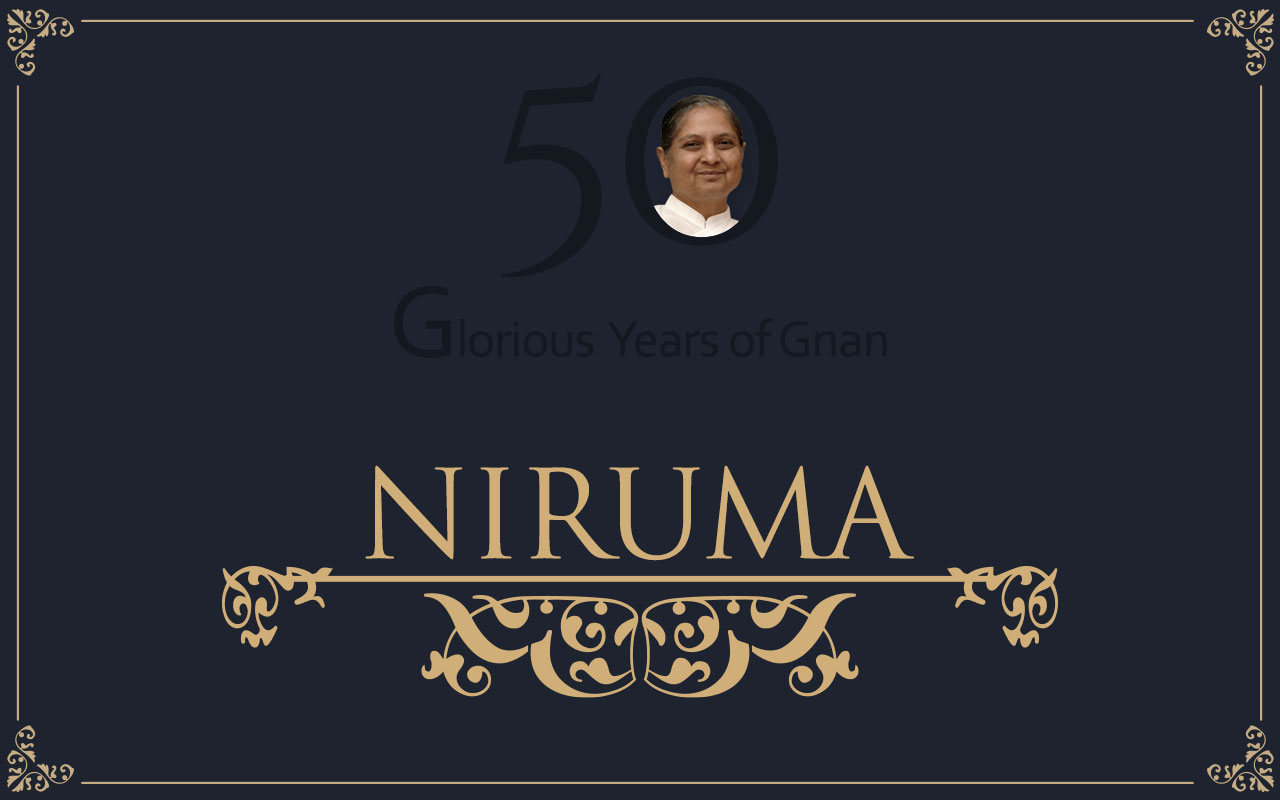 Dr. Niruben Amin, loving called 'Pujya Niruma', was born on December 2, 1944 in Aurangabad, India. She had five elder brothers and was raised with a lot of love and care. Being ambitious, she aimed to serve people after becoming a doctor. Her service during her mother’s illness earned her blessings that helped her understand and progress in Gnan (knowledge of the Self attained through Self Realization). Pujya Niruma’s spiritual receptivity was so acute, that on hearing from her elder brother for Param Pujya Dada Bhagwan, she instantly became interested to meet and attain the knowledge of Self from Him. That night, even before meeting or seeing Param Pujya Dadashri, Pujya Niruma had a dream, where she saw that Param Pujya Dadashri is taking her very, very high in the sky, very, very high, even above the clouds. Then as soon as a thought of suspicion arose in her mind, she fell from that height into the ocean and became a fish! When she woke up, she made the firm decision that, ‘Until the end of my life, I will never doubt Param Pujya Dadashri.’ From this dream, she derived a great conclusion and stayed firm to it throughout her life.

On June 29 1968, Pujya Niruma met Param Pujya Dadashri . At first sight, she had complete surrender for Him. At that time, an urge to spend her whole life in service of Him and Hirabaa [Param Pujya Dadashri’s wife] arose instantly within her. She spent 20 years serving Param Pujya Dadashri and He used to say that she served Him as if they were, “One body and two Souls”. Her awareness in her service was so sharp that she was able to fulfil even the minutest requirements He had. Pujya Niruma had immense love and faith for Akram Vignan. Day and night, her thoughts focused on how this world can attain the knowledge of the Self from Param Pujya Dadashri.

During her discourses in later years, she used to say that her role in Param Pujya Dadashri’s mission of the salvation of the world was like that of a Rajmata (Queen Mother). She explains, suppose a King has passed away leaving a young prince behind, who is the next heir to the throne, then the role of the Rajmata (Queen mother) becomes to protect the young prince and to help mould him into the future King. In addition, she has to develop the Kingdom and ensure that it remains safe until the prince is ready to take the throne. The throne belongs to the Prince and the late King, not the Rajmata, she says. The prince in this case was Pujya Deepakbhai.

Param Pujya Dadashri had said that, ‘Deepak has a lot of sincerity in him. If someone were to develop and mould him, he would reach the pinnacle of any direction he is guided.’ Not letting a word of Param Pujya Dadashri go to waste, Pujya Niruma took up the task of moulding Pujya Deepakbhai. She moulded him in every aspect for Param Pujya Dadashri’s mission for the salvation of the world.

Showering Unconditional Love On All:

Pujya Niruma used pure love as an instrument to attach followers with their ultimate goal of understanding Param Pujya Dadashri’s knowledge of the Self, attaining Shree Simandhar Swami’s refuge and progressing on the path of salvation. For this, she would adjust in every way just to ensure that the person did not divert from the path of salvation. She had the ability to identify positive traits within everyone she met. She would encourage those Positive traits in such a way that other positive qualities automatically developed within that person. She always said that any particular object or piece of work was not as valuable as a person’s heart. All followers were a piece of her heart. They should not get hurt.

“Niruben! You will have to become a mother to the whole world,” Param Pujya Dadashri said to Pujya Niruma, in 1987 during His final days. Pujya Niruma fulfilled Param Pujya Dadashri’s wish of becoming the ‘Mother of the World’ when people began to identify her as a mother. She had so many innate qualities that helped her easily fulfil this wish of Param Pujya Dadashri. In the worldly life, a mother’s love is said to be and is incomparable and free of any expectation. Pujya Niruma’s internal purity was such that this feeling remained the same throughout for everyone and anyone. She was impartial in her dealings while nurturing a person. Her motherly love for people made them so attached towards her that, they worked as hard if not harder as they would have worked in their own business. Followers experienced that when they were working a regular job, they performed less and got more tired and while doing seva it was the opposite. This was all because of Pujya Niruma’s motherly love and care. She won over the hearts of followers with her love.

Param Pujya Dada Bhagwan on October 13, 1968 said, “This Niruben is such that she can become a Tirthankar (The absolutely enlightened Lord who can liberate others)”. In the scriptures, it is said that a woman cannot become a Tirthankara, yet Mallinath Bhagwan was an exception. Pujya Niruma, with her extraordinary spiritual effort was able to destroy all the obstacles on her path and attain the stage of spashta vedan (clear and distinct experience of the pure Soul). Thus, Param Pujya Dadashri used to call her “Malinath” of the Akram.