Unflinching Determination for the Salvation of the World 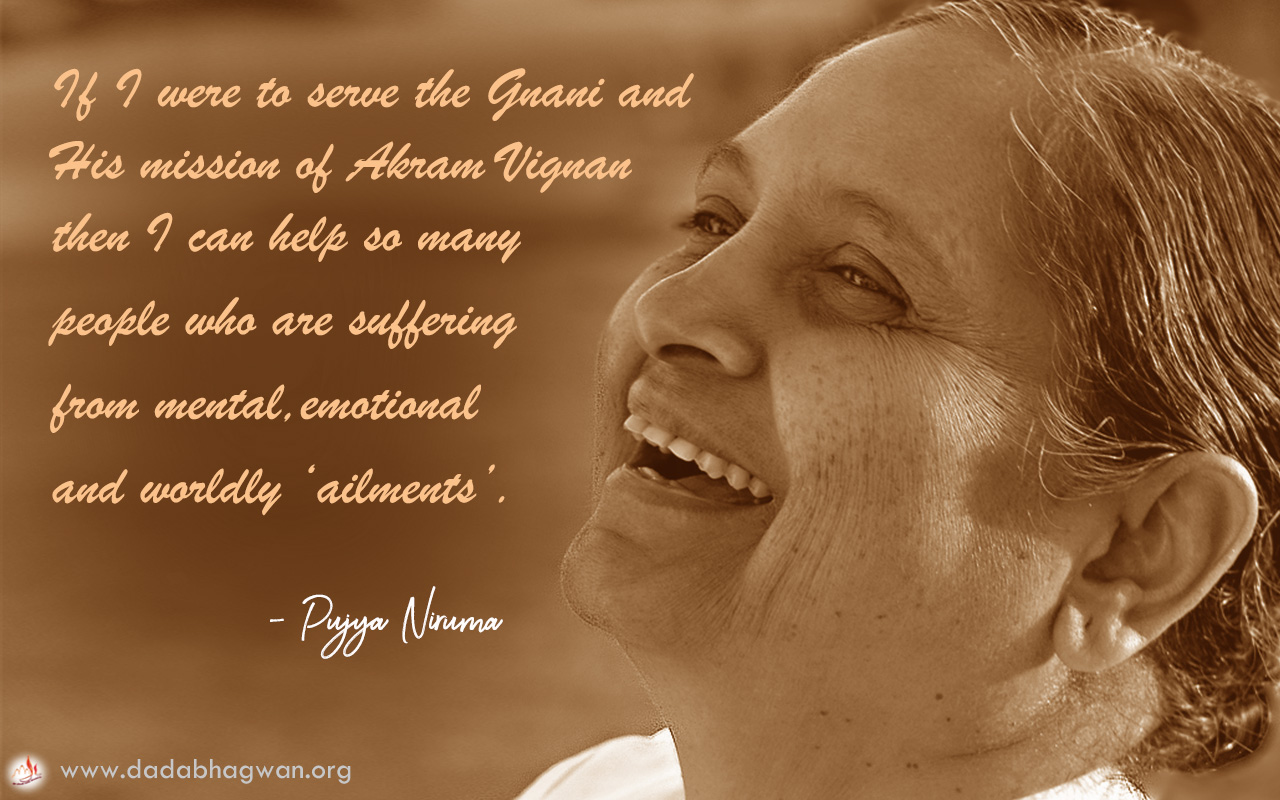 ‘She [Pujya Niruma] is going to be a major instrument for the salvation of the world.’

Since her childhood, Pujya Niruma had only one goal in her mind: to serve humanity without personal gain. During her youth, Pujya Niruma studied in the field of medicine and was in the final year of her studies when she met Param Pujya Dada Bhagwan and was exposed to the spiritual science known as Akram Vignan.

After meeting the Param Pujya Dadashri in the year of 1968 and attaining Self Realization, she immediately experienced separation from her body. She felt as if she had known Param Pujya Dadashri in her past lives. From that point on, at the mere age of twenty-three, Pujya Niruma’s goal altered from becoming a doctor to the salvation of the world. She thought, ‘As a medical doctor, I can only alleviate physical ailments. However, if I were to serve the Gnani and His mission of Akram Vignan then I can help so many people who are suffering from mental, emotional, and worldly ‘ailments’.’

She traveled around the world helping Param Pujya Dada Bhagwan spread the spiritual science. It was their express intention to liberate people from worldly suffering and misery and to instill peace and happiness into the life of many. Simultaneously,  she continued learning more about Akram Vignan from Param Pujya Dadashri and becoming the embodiment of love, compassion and experiencing eternal enlightenment.

Following the departure of Param Pujya Dada Bhagwan, Pujya Niruma continued to fulfil every wish of His. From the first ever construction of Simandhar City (a residential place for the followers to stay together), a non-sectarian temple uniting the three major religions in India, to the grooming and nurturing of a hundred celibate men and women for the dedication to the mission of world salvation.

The love that she spread to everyone around her was incomparable! Everyone felt that she was their mother. She loved unconditionally; never expecting anything in return. Anyone who was privileged to have met her used to leave with the feeling of being special, cared for and blessed.

Pujya Niruma’s service to the world was with unwavering devotion, dedication, commitment and the highest sincerity. The mission of Akram Vignan did not even stop when her health was extremely poor. Nothing could deter her unflinching determination to fulfil her promise given to Param Pujya Dada Bhagwan for the salvation of the world. Every atom of her body was meant for spending for the liberation of all beings.

Spreading the message of Param Pujya Dada Bhagwan’s spiritual science through various means brought inevitable fame to her, but she maintained absolute purity taking no credit and or self-praise for herself. She would always give all the credit to Param Pujya Dada Bhagwan’s grace and power. Even today, twelve years since she left her mortal body, Pujya Niruma touches and lives in the heart of many new or old seekers.