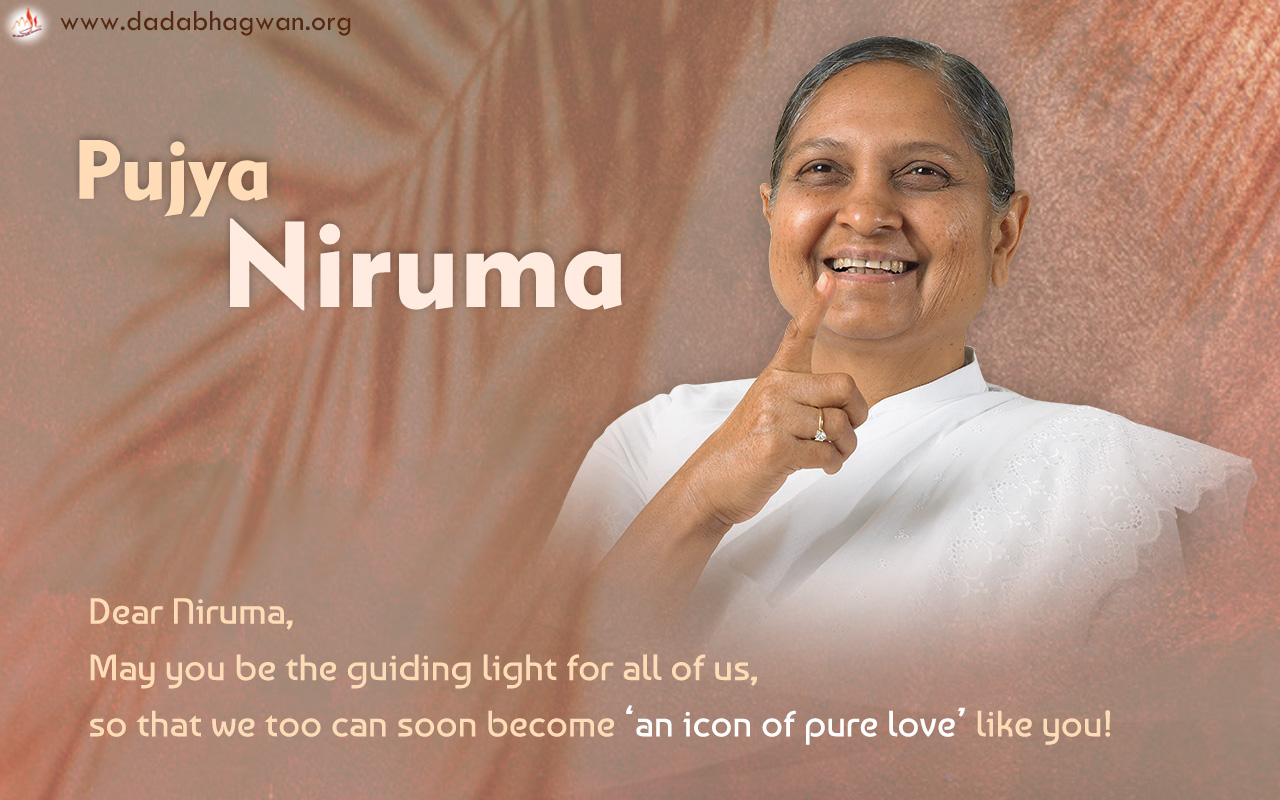 The world we are living in is rapidly changing…and today it is changing faster than ever before. Along with the external changes, we often keep changing internally too, based on our experiences and everyday learning. Sometimes amidst this chaos around us, someone comes into our life and this by- chance meeting changes the course of our entire life, sometimes for the best!

This is what happened with a young girl named Niranjana (Niruben) from Aurangabad who was studying to become a doctor and serve mankind. The life-changing event happened when she was in her final year at college, and the rest is a story of inspiration and motivation for all.

Let’s read about some of the incidents that happened in the life of the little ‘Niranjana’, which made her rise to the state of ‘Niruma’ (an icon of Pure Love)!

Whilst in her final year at college, Niranjana’s (Niruben’s) brother told her about Param Pujya Dada Bhagwan, the Enlightened One, with whose grace, anyone could attain Self Realization. Her brother said, this knowledge was so powerful that no worldly troubles or worries would touch her thereafter. Though this incidence might, on the face of it, appear as an ordinary one, but it wasn’t so!

It was special in two ways –

Accordingly, Niruben met Param Pujya Dadashri for the first time in Vadodra. This special meeting happened on June 29 1968. Instantly, upon seeing Dadashri, she felt as if she had known him for many past lives and was now being reunited with him.

At that time, a strong desire arose within her, 'How wonderful would it be if I could serve Param Pujya Dadashri until my final breath!' In this first meeting itself, in her heart, she completely surrendered to the Gnani. Thus, this seemingly simple meeting was profound in its own way, as within few moments of meeting, Niruben felt a strong connection with the Gnani and felt a sense of belonging and surrender!

This one thing then led to another!.

Amidst all of this, everyone in her family was looking forward to the young Niruben setting up her own medical practice. Her father had plans to build a hospital for her. However, by now, Niruben had a different plan in her mind. She thought, “As a medical doctor, I can only alleviate physical ailments. However, if I were to serve the Gnani, I can help so many people suffering from mental, emotional and worldly ailments; as Dadashri would be able to grace them with this unique knowledge of Akram Vignan.” There are so many doctors to help people with their health, but there is only one Gnani Purush to liberate them!

With this lofty purpose in mind, she resolved to spend her life in service of Param Pujya Dadashri and help Him spread this knowledge that instilled peace and liberated people from worries and suffering. Thus in 1968, at a tender age of twenty-three, she traded a life filled with worldly comforts for one of devoted service to the Gnani Purush. This was another milestone in Niruben’s life which changed the course of not only her life but of many others too, through her. Within a very short time, she became an exemplary model of seva (selfless service).

Niruben’s only goal was to help Param Pujya Dadashri fulfill his profound desire of ‘the world attaining liberation through the simple path of Akram Vignan.’

In 1987, greatly satisfied with Niruben’s progress, Param Pujya Dadashri, in His final days, said, "I am very pleased with you Niruben. This Niruben is a great instrument for the world's salvation. Niruben, you will have to become a mother to the whole world. Whenever Niruben wants, Dadashri will speak from within."

Thus, Param Pujya Dada Bhagwan blessed Niruben with His special spiritual powers so that she too could grace others with Self Realization and continue the work. She in turn, promised to fulfil His vision for the world's salvation, until her last breath. Nothing could ever deter her unflinching determination to fulfill the promise she had given to Param Pujya Dadashri. People lovingly called her Niruma (the mother of all).

She continued the mission till the last breath of life! On March 19 2006, Pujya Niruma passed away in a state of absolute samadhi (a blissful state, resulting from being in the state of Pure Soul awareness and complete detachment from the body).

Her final message to all was, "Live with Love.Promise?"

Many people witnessed Pujya Niruma's spiritual energies during Her physical presence, but countless more are still experiencing Her subtle energies even today!

On this occasion of Pujya Niruma’s Punyatithi, let us all remember Her and vow to continue Her mission in our own little ways, and make a special prayer to her, “Dear Niruma, May you be the guiding light for all of us, so that we too can soon become ‘an icon of pure love’ like you!”