Making a reality all of Param Pujya Dadashri’s wishes 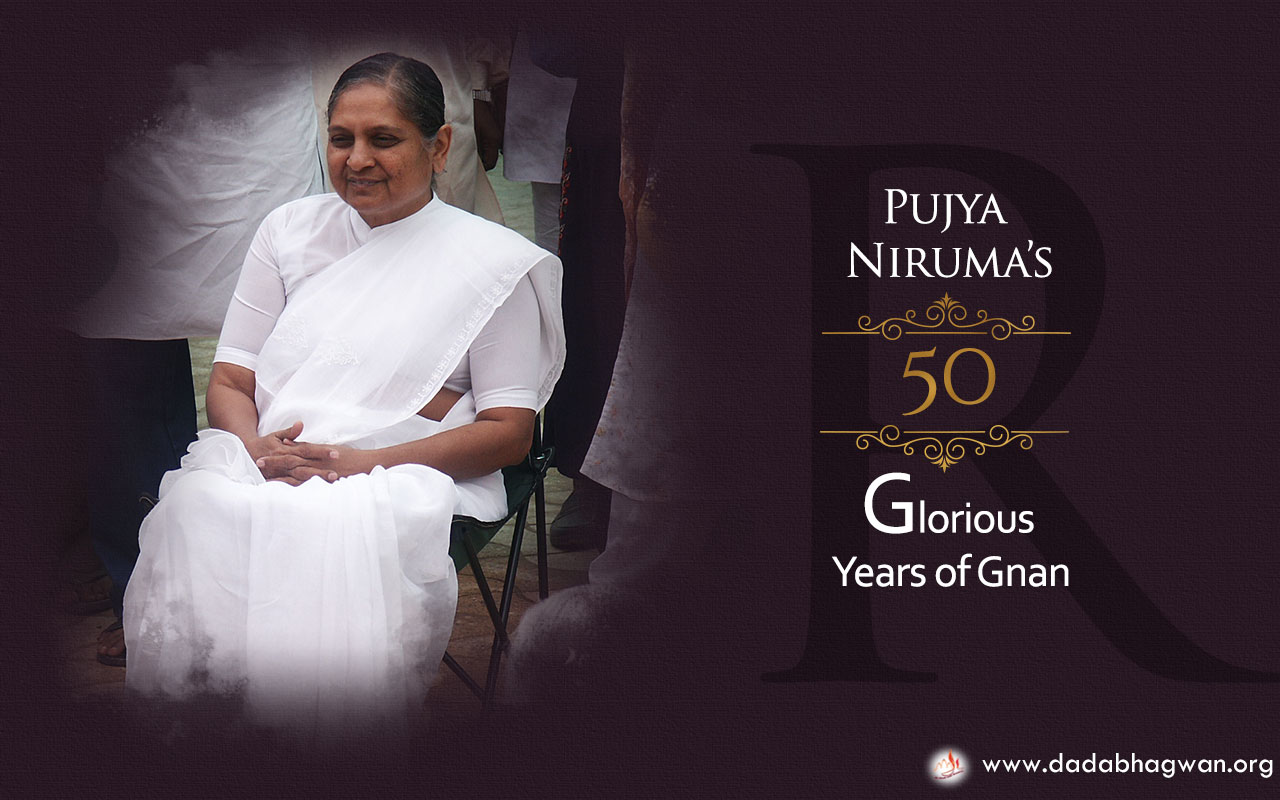 Param Pujya Dada Bhagwan left His mortal body on January 2 1988, at 1:20pm. At that time, a thought arose within Pujya Niruma, ‘[Param Pujya Dadashri] has gone. Hadn’t He given me a promise [that He would never leave me]?’ On the same day, at midnight, Pujya Niruma recalls that she must have just dozed off and at that time in a loud voice, Param Pujya Dadashri said from within, ‘Why are you worried? I am with you. You continue doing your work.’ This voice lasted within her non-stop for years. Whenever there was a problem or a thought arose about the future, Param Pujya Dadashri would appear and tell her this in a loud voice. This gave her the confidence to go on.

Thus, Pujya Niruma started her journey to spread Akram Vignan and make a reality even the smallest of Param Pujya Dadashri’s wishes. She travelled to small villages in India where Param Pujya Dadashri had never been, facing hardships, but she never let those hardships stand in her way.

She started her work for the salvation of the world, from a small place in the ‘Mistry’ building in Mumbai, India. From there, she later moved to a small apartment in a building in Ahmedabad, called ‘Varun’. As the days passed and in order to accommodate an increasing crowd of followers, an entire building was built in Ahmedabad, called ‘Dada Darshan’. Pujya Niruma’s goal was that Param Pujya Dadashri and His spiritual science of Akram Vignan spread to every corner of the world. To make this a reality she travelled extensively throughout the entire world.

Once ‘Dada Darshan’ started to become small, there became a need to establish a bigger centre. During that time, a follower suggested that there was a lot of open land near a village called Adalaj, which was not far from Ahmedabad. Pujya Niruma took into account this small suggestion and had it investigated further. It ended up being the land where the Adalaj Trimandir complex was built. Within the complex, Simandhar City, a residential colony for followers was built, where they could collectively stay and practice the principles laid out by Param Pujya Dadashri and progress on their path to liberation. Param Pujya Dadashri had foretold that a city like this would be built and it would have red shingle roofed houses. This detail was also taken into account when the city was being built.

A ‘Gigantic Hall’ was built below the Adalaj Trimandir, where a large number of people could be accommodated comfortably to attend the spiritual discourses conducted. A Dormitory, for visitors to stay overnight. A Temple Dining Hall, where visitors can eat pure food. A Gurukul (Hostel for Boys), where children are nurtured with great love and care. Nirant, a home for senior citizens, where they can spend the remaining part of their lives worry-free and study Akram Vignan in depth. The Trimandir Complex also has a Bank, Amba Health Center, Amba Refreshments Restaurant and a school for children. Param Pujya Dadashri also described all these places.

An ardent follower of Param Pujya Dadashri, Pujya Niruma led the Dada Bhagwan Foundation, fulfilling all of Param Pujya Dadashri’s dreams. She never established herself as the doer and let all the major decisions of any new projects be decided by the individuals involved in it. In this way, she stayed the smallest of the small even though she had the authority to change decisions based on her single word. She also developed young celibate followers by giving them various projects even though they were inexperienced in the connected fields.

During her discourses in later years, she used to say that her role in Param Pujya Dadashri’s mission of the salvation of the world was like that of a Rajmata (Queen Mother). She explains, suppose a King has passed away leaving a young prince behind, who is the next heir to the throne, then the role of the Rajmata (Queen mother) becomes to protect the young prince and to help mould him into the future King. In addition, she has to develop the Kingdom and ensure that it remains safe until the prince is ready to take the throne. The throne belongs to the Prince and the late King, not the Rajmata, she says. The prince in this case was Pujya Deepakbhai.

Param Pujya Dadashri had said that, ‘Deepak has a lot of sincerity in him. If someone were to develop and mould him, he would reach the pinnacle of any direction he is guided.’ Not letting a word of Param Pujya Dadashri go to waste, Pujya Niruma took up the task of moulding Pujya Deepakbhai. She moulded him in every aspect including how to purchase routine groceries, take care of celibate followers, the residents of Simandhar City and over-see various projects in Param Pujya Dadashri’s mission for the salvation of the world.

To know how she nurtured and developed everyone to carry out their worldly duties, while remaining in the knowledge of Self, stay connected for the upcoming part.