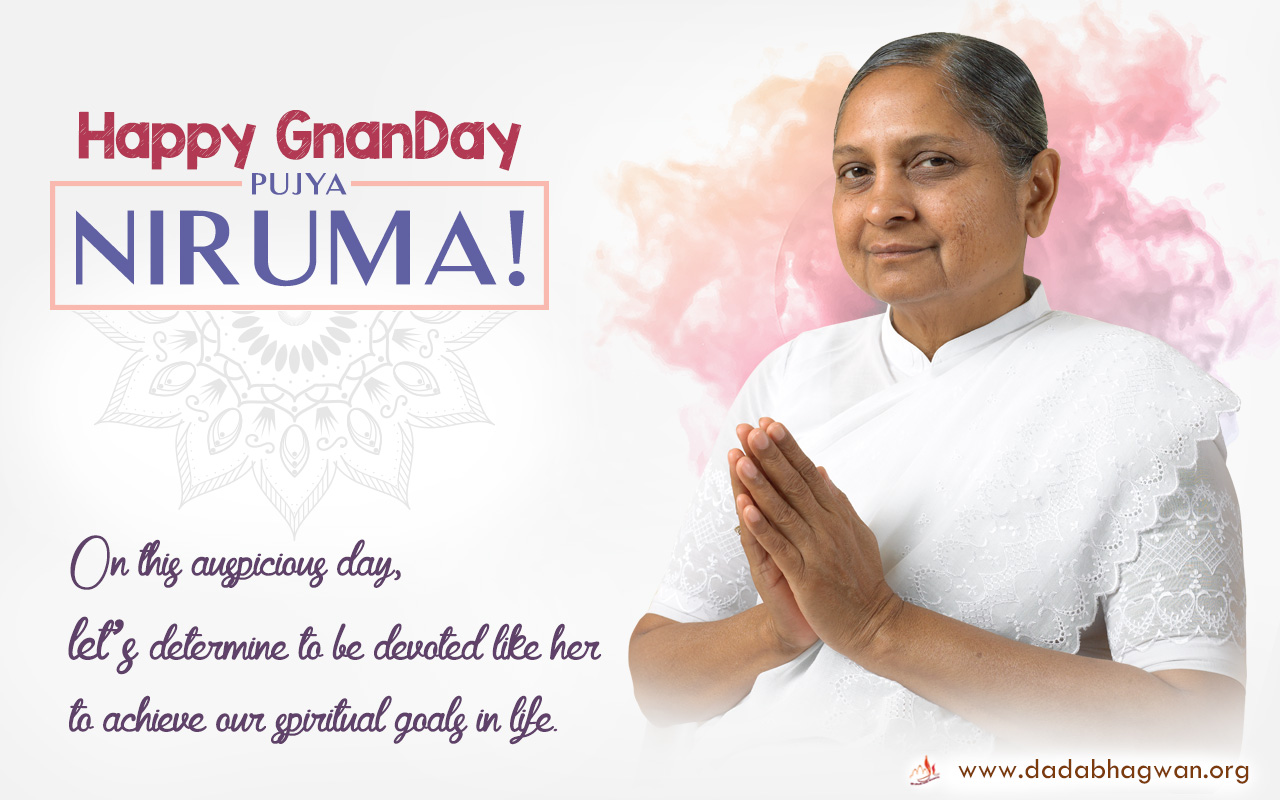 Dadashri, and His mission of instilling peace in the lives of people and liberating them from the cycle of birth and rebirth, inspired Niruma so much so that she firmly resolved to spend her entire life in the service of Dada and His mission.

Dadashri too, was equally keen in carving and shaping Pujya Niruma personally, so that he could create a marvelous idol out of her which could prove useful for Jagat Kalyan i.e. Salvation of the World. He, like a sculptor, never hesitated in chiselling jabs wherever, whenever and of whatever type were necessary to get Niruma ready for the job.

On the other side, Pujya Niruma also had such lofty qualities that allowed Dada a free hand to mould her the way he thought was appropriate for her. She stoically received, accepted and withstood His every treatment designed by Him to prepare her for the formidable role as the torch bearer of His mission named Akram Vignan. This gave Dada full scope to patiently and persistently dust off all her inner impurities one after another from every nook and corner within.

One of her best qualities was that amidst this entire process, she never let the minutest of differences to arise between her and Param Pujya Dadashri. No matter what Dadashri would do or say, she would always receive it with complete grace, total surrender, ultimate humility; maintaining full oneness with Him. Her devotion towards Dadashri was no match to anyone else and it remained unaffected and steadfast in every eventuality.

She could pick up the smallest of the hints received from Dadashri for her mistakes, and would work hard to not allow the mistake to repeat again. Her analytical power was so strong that once being told about something, she could analyse the matter from every angle. And her hot pursuit to get rid of any mistake was remarkable. There were occasions where she had to struggle quite a bit but she would never stop working on it until she discovered and dug out the root cause of that mistake. Her unfailing dedication and devotion for Param Pujya Dadashri saw her through all the odds.

With such majestic virtues and her extraordinary skills and abilities, she won Param Pujya Dadashri’s rajipo, grace and compassion and ultimately became one with Him. He was immensely pleased and contented with her development.

After Param Pujya Dadashri, with her unflinching determination and pure dedication, she took forward Param Pujya Dadashri’s mission of salvation of the world. And she also lovingly nurtured the future torch bearer - Pujya Deepakbhai to take up the lead and spread Akram Science in the whole world.

Even after Dadashri passed away, she continued to take into account every small guidance that she received from Him. Never did her single thought go against her goals. She possessed such determined, strong willed and clear understanding for the goals that it not only took her to great spiritual heights but she could also plant the seeds of spirituality in thousands of people and make them progress on the path of salvation.

So come, on this auspicious day, let’s determine to be devoted like her to achieve our spiritual goals in life.