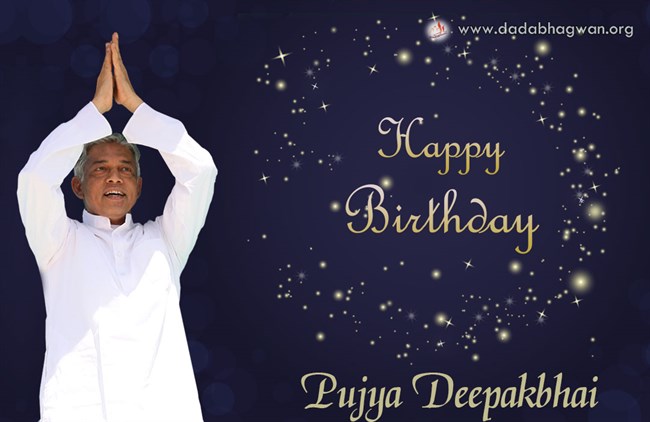 Pujya Deepakbhai was born on 9th May 1953. He received the Knowledge of the Self from Param Pujya Dadashri at the age of 17. On the auspicious day of Pujya Deepakbhai’s birthday, let us understand more about one of His numerous virtues, sincerity!

Can you imagine doing a task assigned to you, for more than 4 months, with the same devotion and sincerity, without complaining or getting bored even once? No right? But Pujya Deepakbhai has been able to! He obtained the opportunity to write Param Pujya Dada Bhagwan’s speech from Pujya Niruma shortly after receiving Self-Realization. For more than 40 years now, He has continued this task with an unwavering sincerity and devotion! Should we not learn from Him? According to Pujya Dadashri, this virtue of sincerity is the main road to reach God, which ultimately leads one towards salvation. And Pujya Deepakbhai, is a living example of someone who has reached the epitome of sincerity, who has shown us how one can become successful in any endeavor, by remaining sincere to our goal.

Let us pray that Pujya Deepakbhai has a long healthy happy life filled with the everlasting experience of the Soul, that He continues to be a great instrument in the salvation of the world, that His next birth is at the lotus feet of Shree Simandhar Swami and that He attains moksha (ultimate liberation).