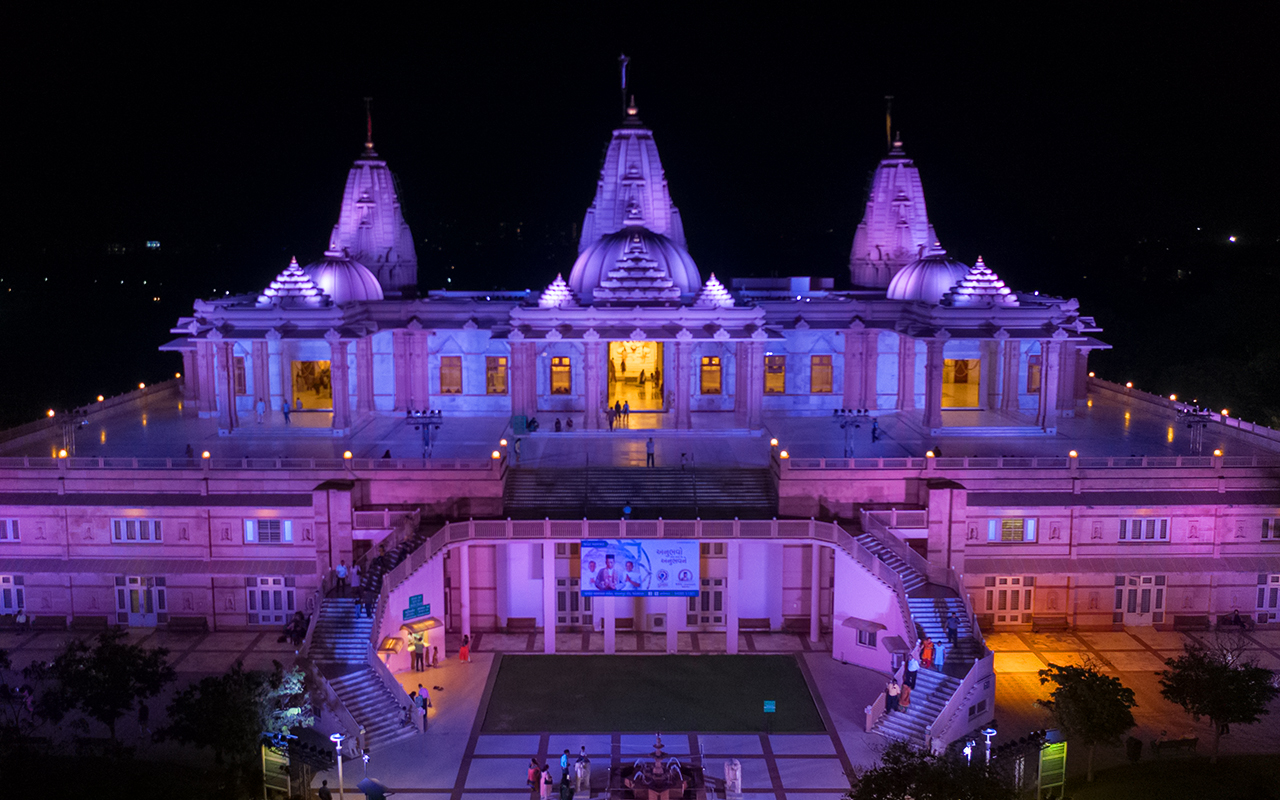 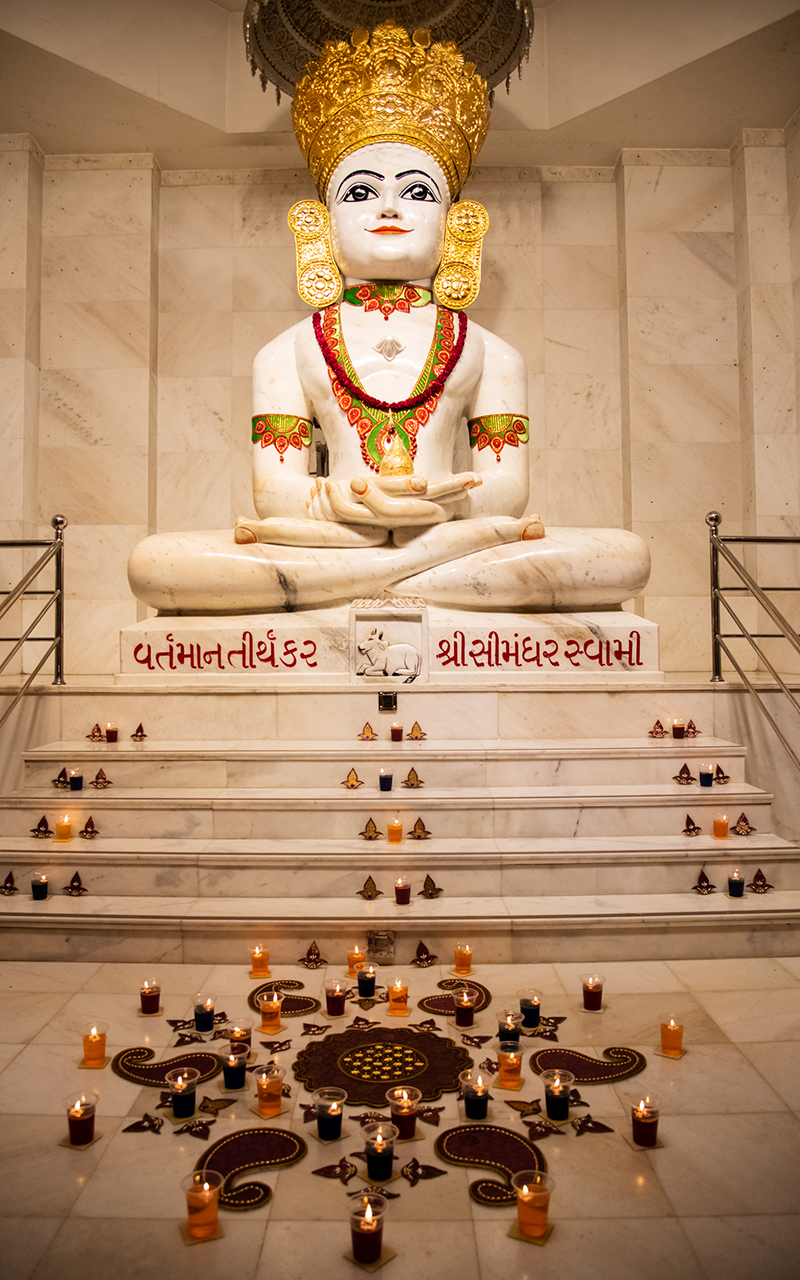 Then, as the sky dusked, the beautiful lighting on the streets and the trees, on the walls and in the halls illuminated every corner of the Trimandir Adalaj campus. While the enchanting Diwali lamps outside every Mahatma’s home dispelled the outer darkness of the New Moon day, Pujyashree, with His divine presence, kindled the light of joy in every heart of His beloved Mahatmas!

In the evening, during the special Bhakti programme, after the choisest devotional songs being sung by Mahatmas, when Pujyashree, in His turn, sang an awesome unheard devotional song, it left the audience spellbound! As the words spilled from Pujyashree’s lips, it captivated the chit of the Mahatmas so much so that the entire environment of the Dada Bhagwan Convention Hall, where this Bhakti was held, oozed a strong feeling of oneness (abhedta) within!

"While Diwali signifies the Nirvana of Lord Mahavir, it also marks the Keval-Gnan of Gautam Swami, His prime disciple", said Pujyashree! 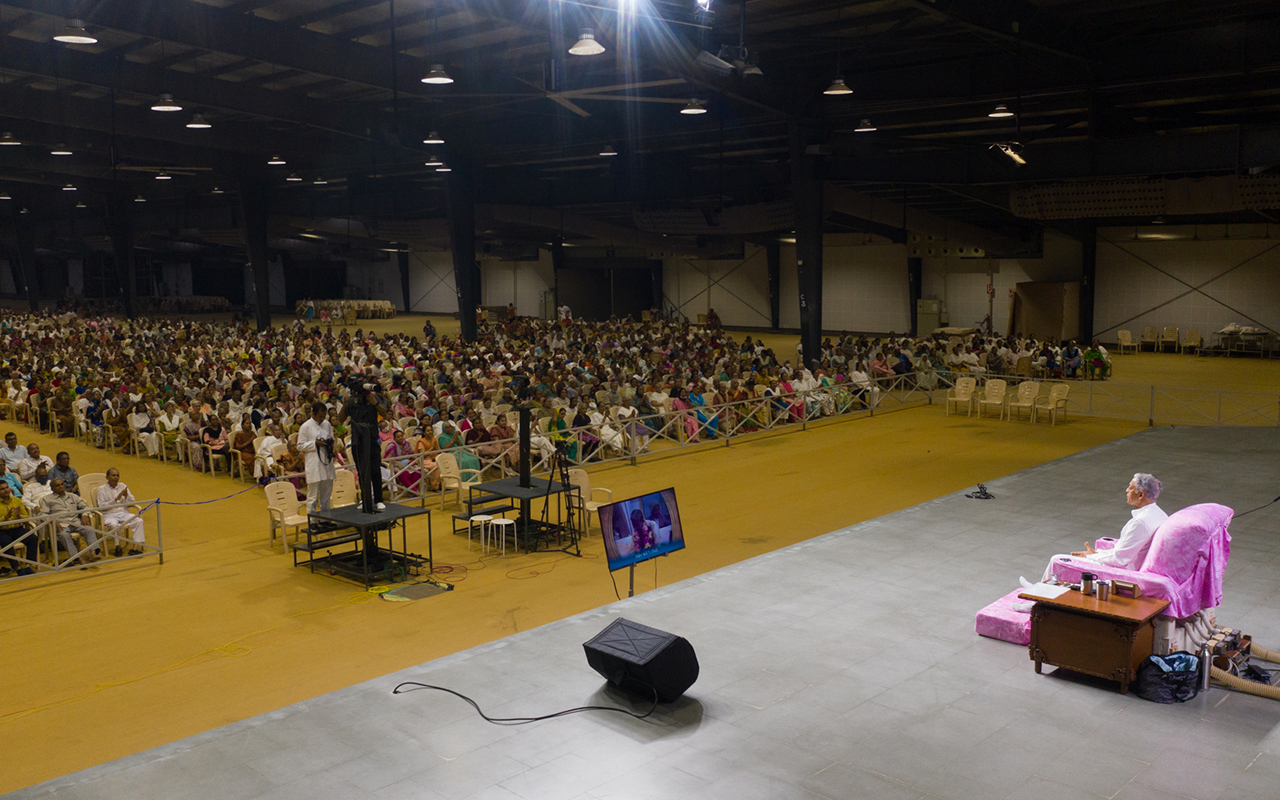 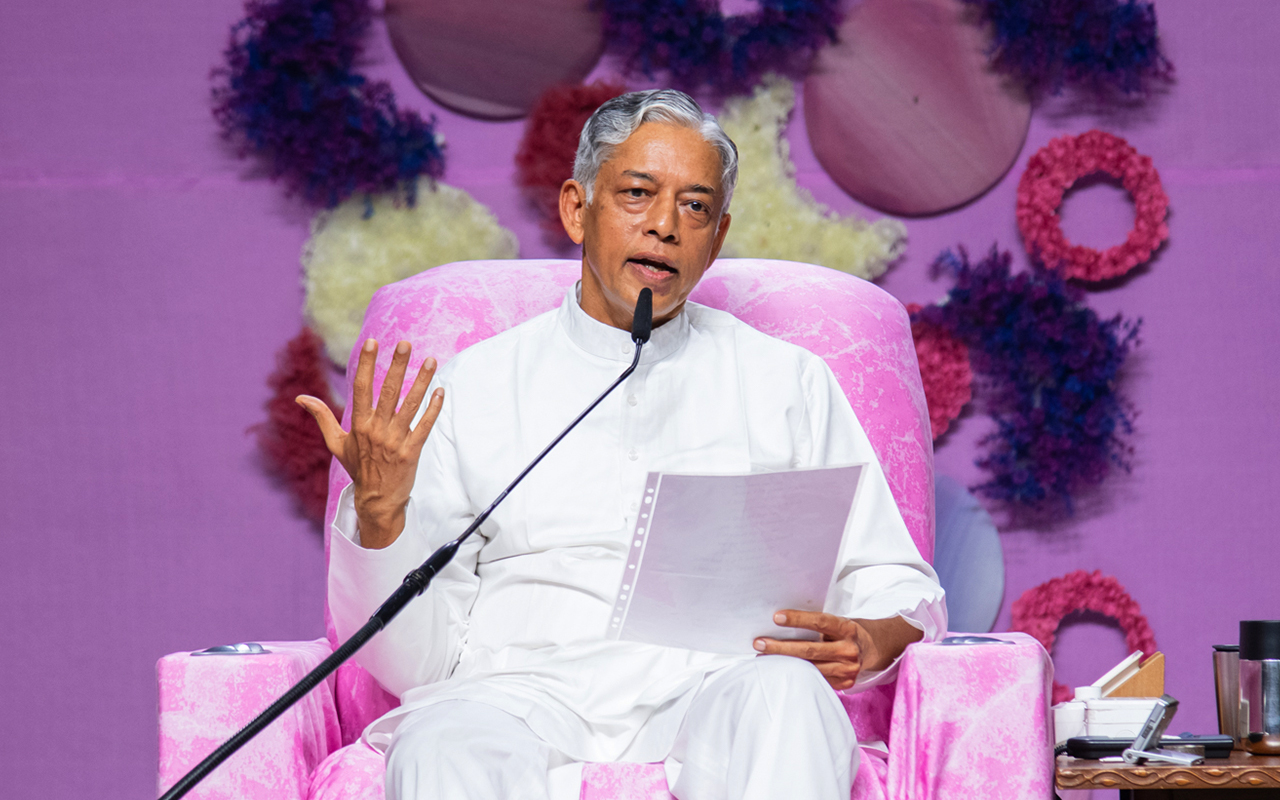 Mahatmas enjoyed to their heart’s content a splendid New Year celebration as they got to pass the entire day in the divine presence of their dearest Pujyashree!

Later, when Pujyashree arrived at the temple, all the Mahatmas, together with Him, did the New Year Darshan of all the deities, and the Annakut too. Pujyashree offered a variety of items as prasad to Param Pujya Dada Bhagwan, and graciously distributed chocolates to the crowd present in the temple. He then performed the vidhi, granting strength to every Mahatma, for following the ‘Paanch Aagnas’. 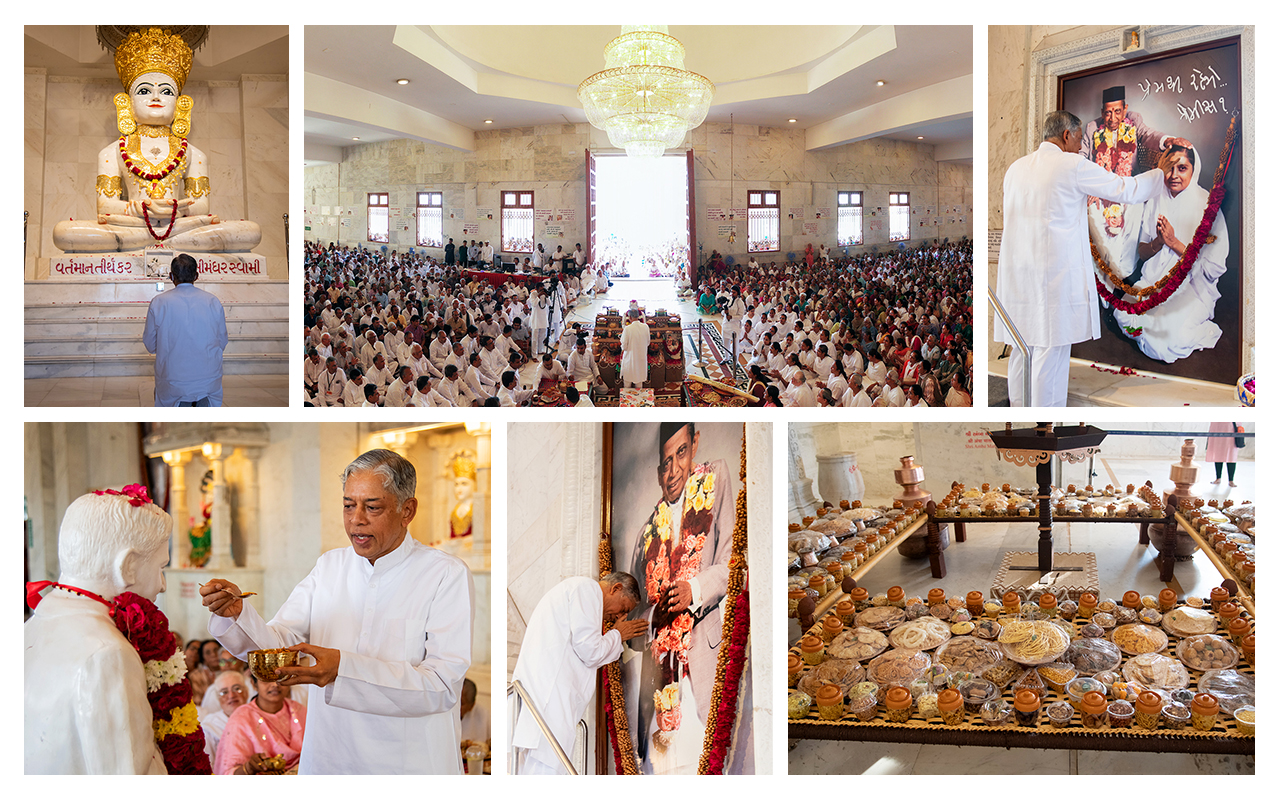 Thereafter, Pujyashree came to the Dada Bhagwan Convention Hall, where He delivered the message for the New year, which was, “See positive and remain happy!” Through this message, He also invoked in Mahatmas, the inner awareness to see our ego and the intellect, the duo-generators of the anger-pride-deceit-greed which doesn’t allow us to see the positives in the other person, and as a result, makes us miserable.

Soon after the message, Pujyashree once again performed Vidhi to help us all progress on the path of liberation. Thereafter, the Mahatmas who had poured in from all over the world to attend this event in person, almost more than 10000 in number, queued up in a line and one-by-one touched the feet of Pujyashree (after more than two years of Corona) and looking into His eyes, did the Darshan of the Divine!!! This went on for almost the entire day! 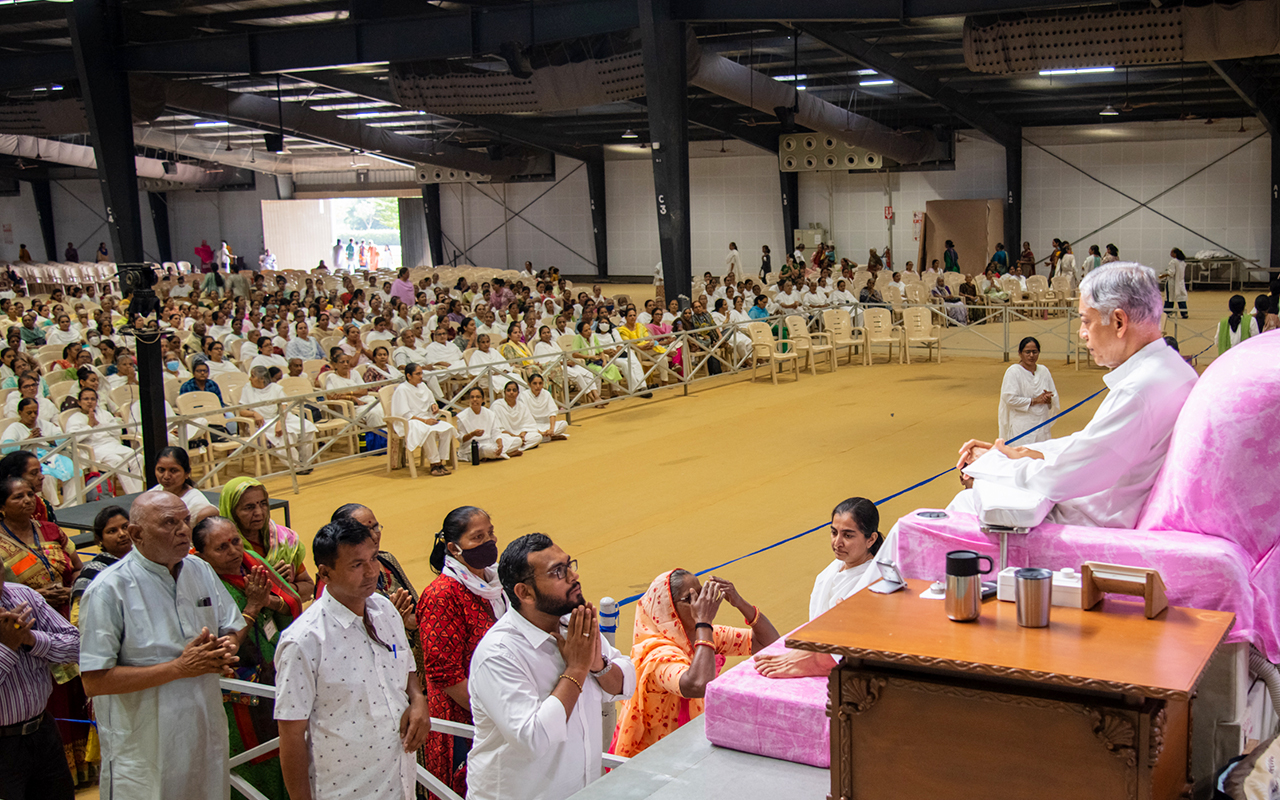 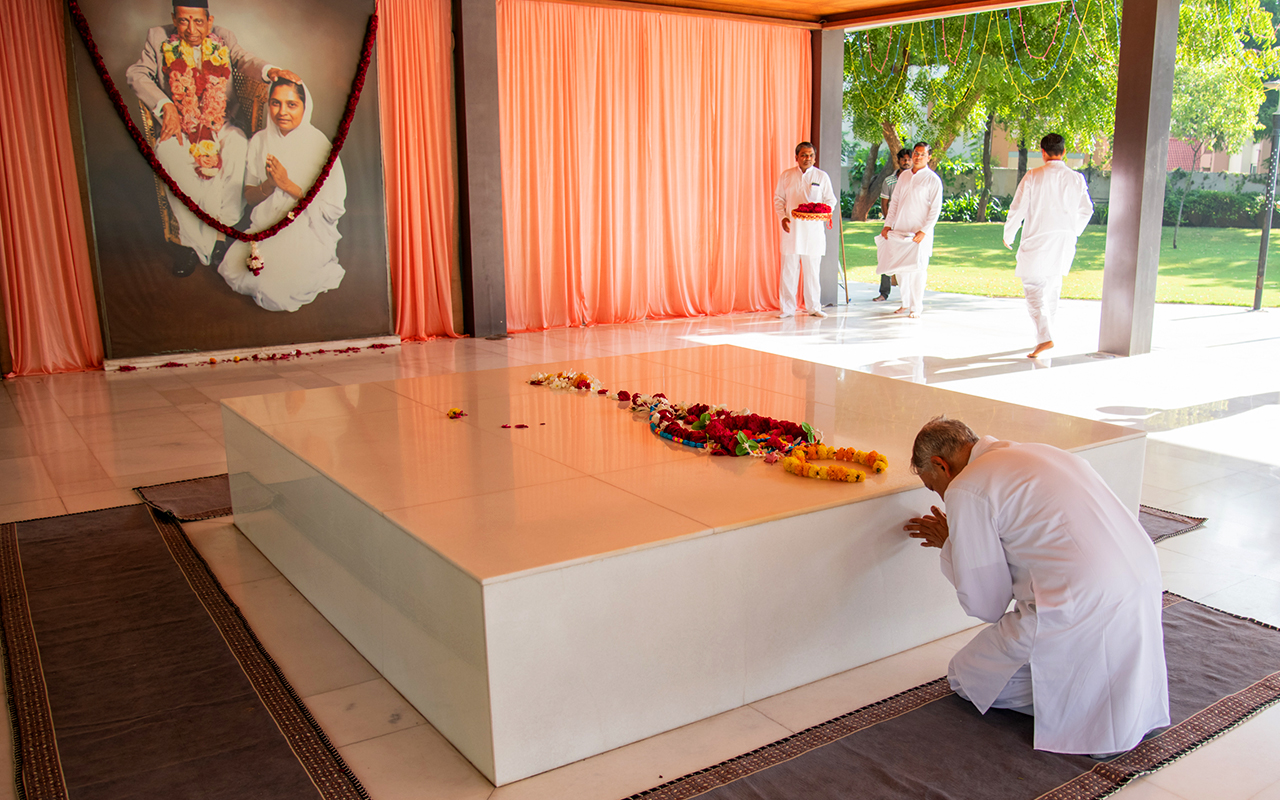 Mahatmas, in the divine presence of the Gnani, asked for strength to come out of their respective weaknesses and progress on the path enlightened by Him. And the Gnani, on His part, graciously blessed everyone as this verily is His own heart-felt desire that, ‘May every living being in this world attain the happiness that I have attained!’