Like every year, this time too, people from all corners of the world, approximately 8000 in number, assembled in Adalaj, India, to do a devout study (aaradhan) of one of the spiritual books of Param Pujya Dadashri’s teachings. This event is popularly known as ‘Parayan’.

This time it was the Parayan of the book, ‘Aptavani 14 – Part 1’, which carries an awesome collection of a series of very good questions asked to Param Pujya Dadashri, that in turn helped Him place before the world, the profound knowledge regarding the substance, the properties and the phases of the eternal element ‘Soul’, at length, through the medium of the simple answers given by Him to each of the questioners.

Param Pujya Dadashri’s vaani (spoken words) is Gnan-vaani (real knowledge) and it points to our real Self. So that we understand this vaani correctly, Pujya Deepakbhai, in august presence of whom this event is conducted, explains us the essence of what Param Pujya Dadashri really means to say, in depth, but through a most simplified and elaborate explanation of the matter. This helps each one, depending upon his level of development, grasp the knowledge accordingly and progress to the next mile of his spiritual journey.

Principally, as much acquaintance of Gnani is obtained, that many veils of ignorance fall off and that much bliss is experienced. Gnani is therefore called ‘the cash bank’, because in His presence, the ultimate bhaav bhakti effortlessly happens and one gets immediate results. It is just like when one takes a dip in Ganges, the water keeps flowing and his dirt keeps reducing. So during these nine days (Dec 21 – Dec 29) of Parayan:

All of these done twice a day in the morning as well as in evening, each one experienced tremendous progress in himself. For this reason, these satsangs are also telecast LIVE on YouTube and Arihant TV channel, so that more and more people can remain more and more connected with the Living Enlightened One!!!

This event was characterized by one more highlight i.e. ‘Pratishtha of 1066 small idols (to be installed in individual homes) of Lord Simandhar Swami, the living Tirthankara’ that happened on the last day i.e. Dec 29. Gnani says, “As one’s devotion for Lord Simandhar Swami increases, the connection with Him continues to grow; and finally when the loving bond with Him becomes intimate, one ultimately reaches the feet of this Living Lord in his next life and gets liberated from the cycle of birth and death forever.

To sum it all, the benefit derived from this Parayan is invaluable. What one gains out of it is matchless INDEED! Without too much effort, one gets engrossed in the aradhana and automatically experiences a unique transformation and progress in spiritual life. 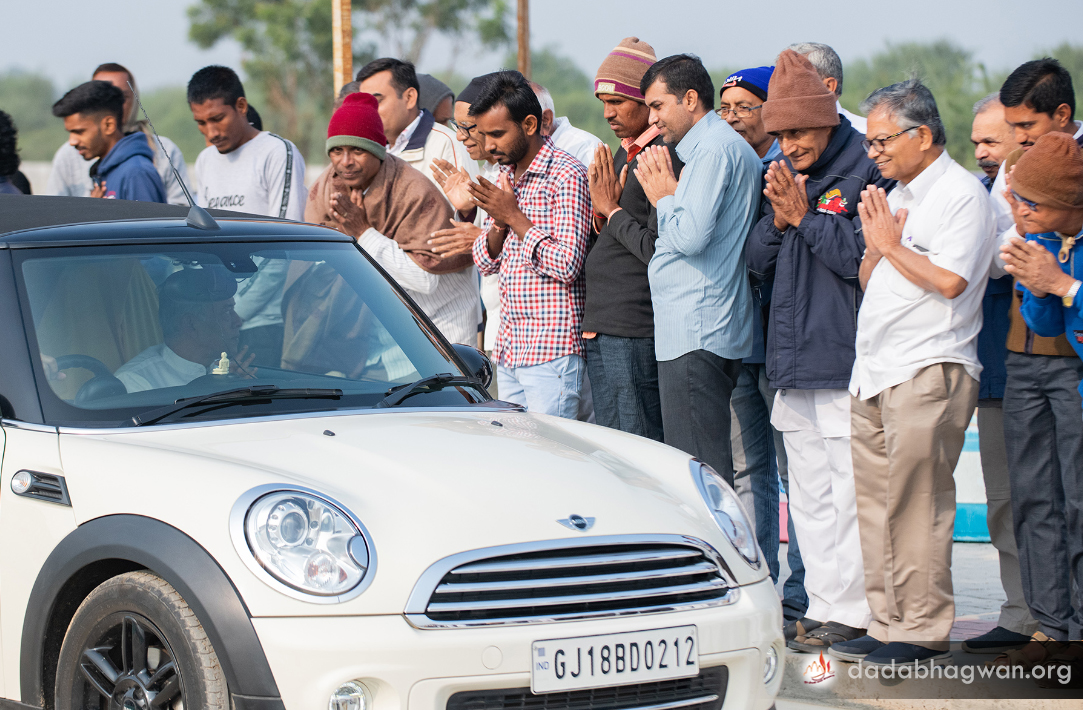 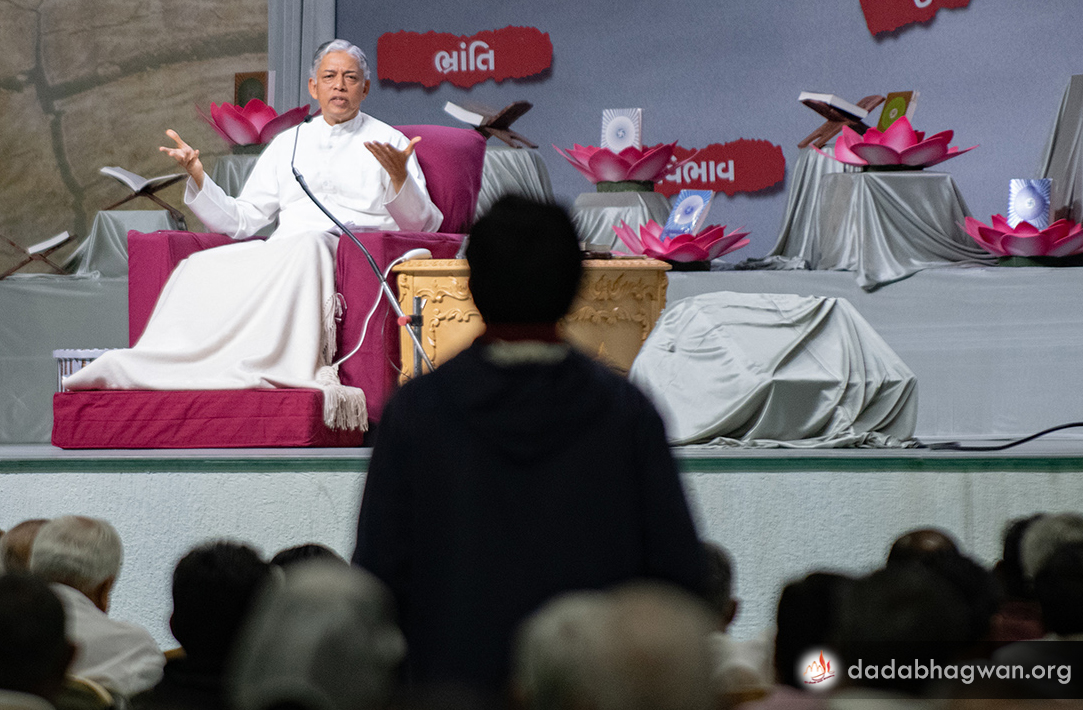 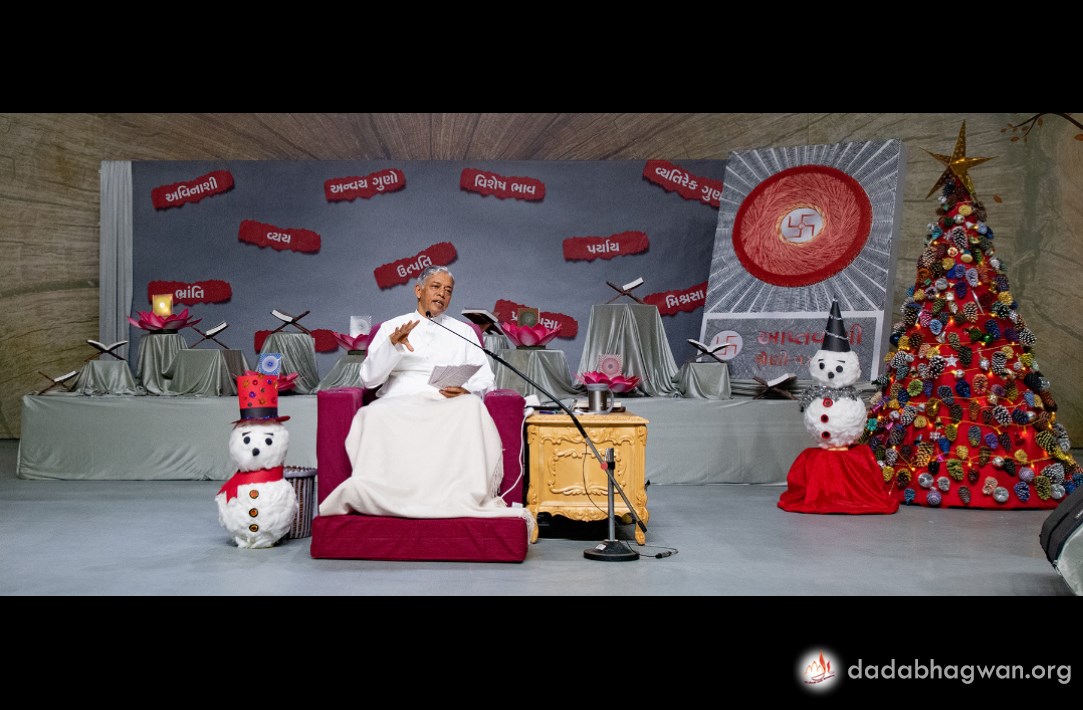 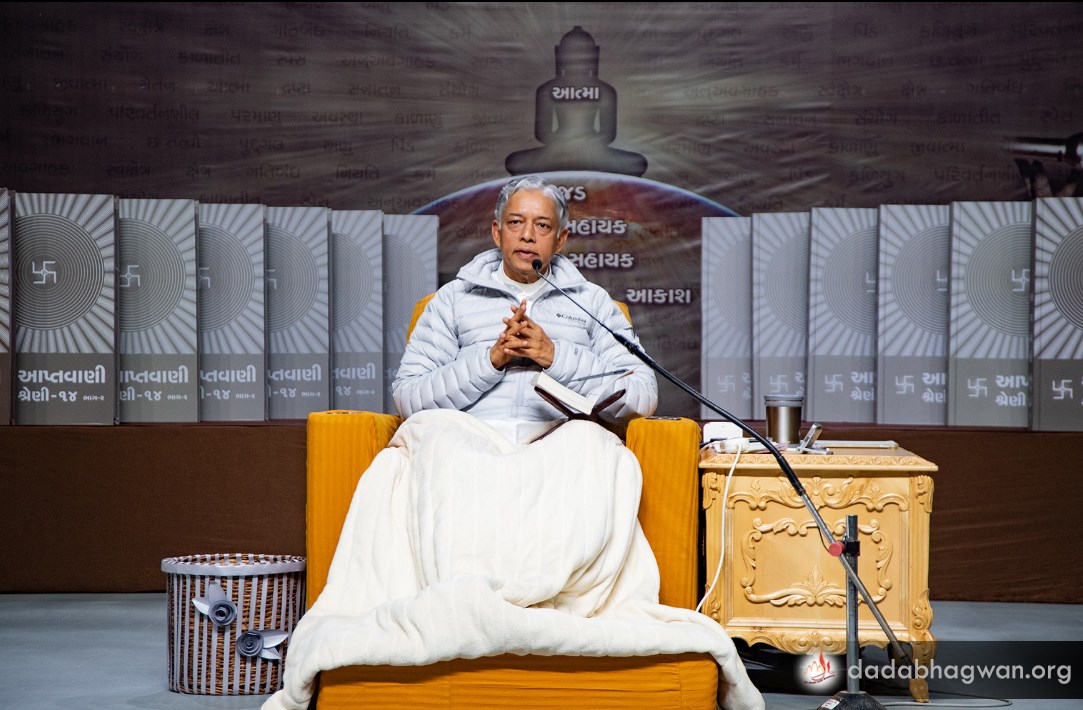 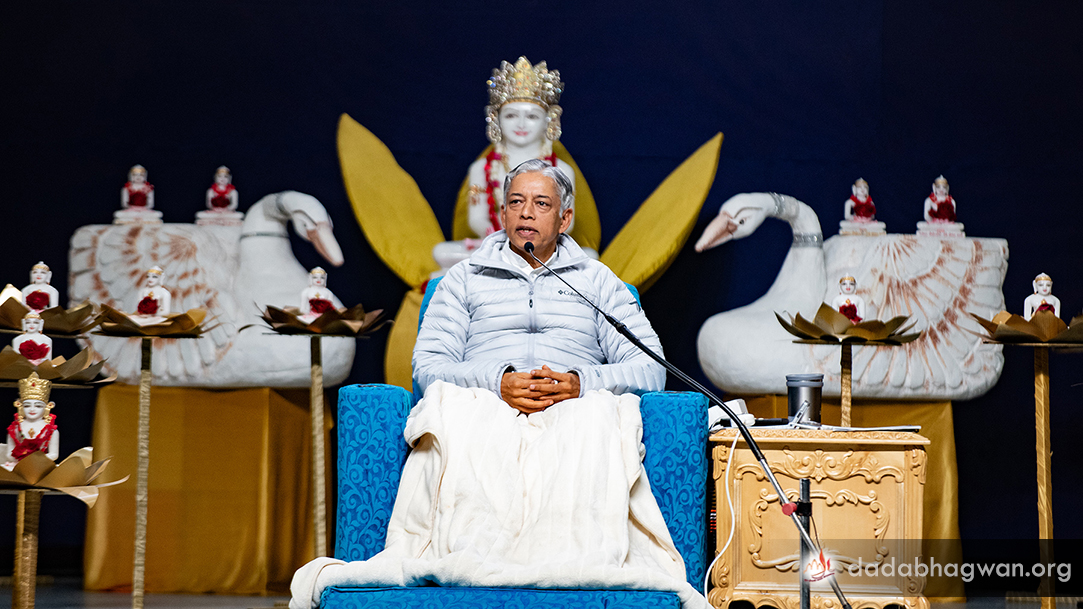 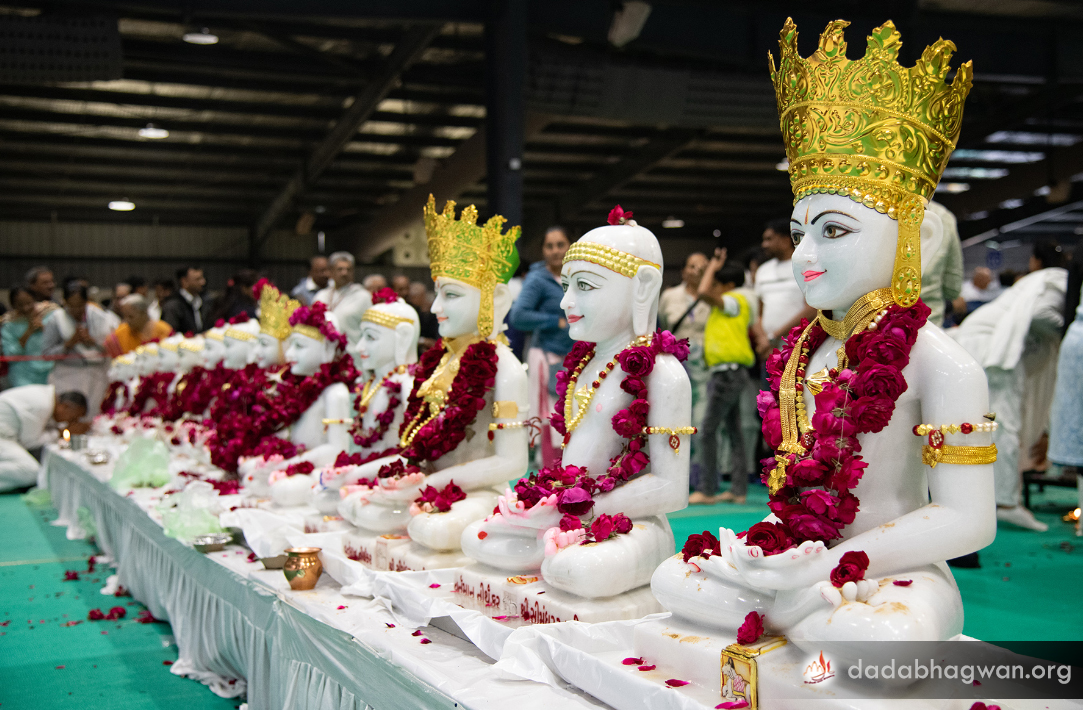 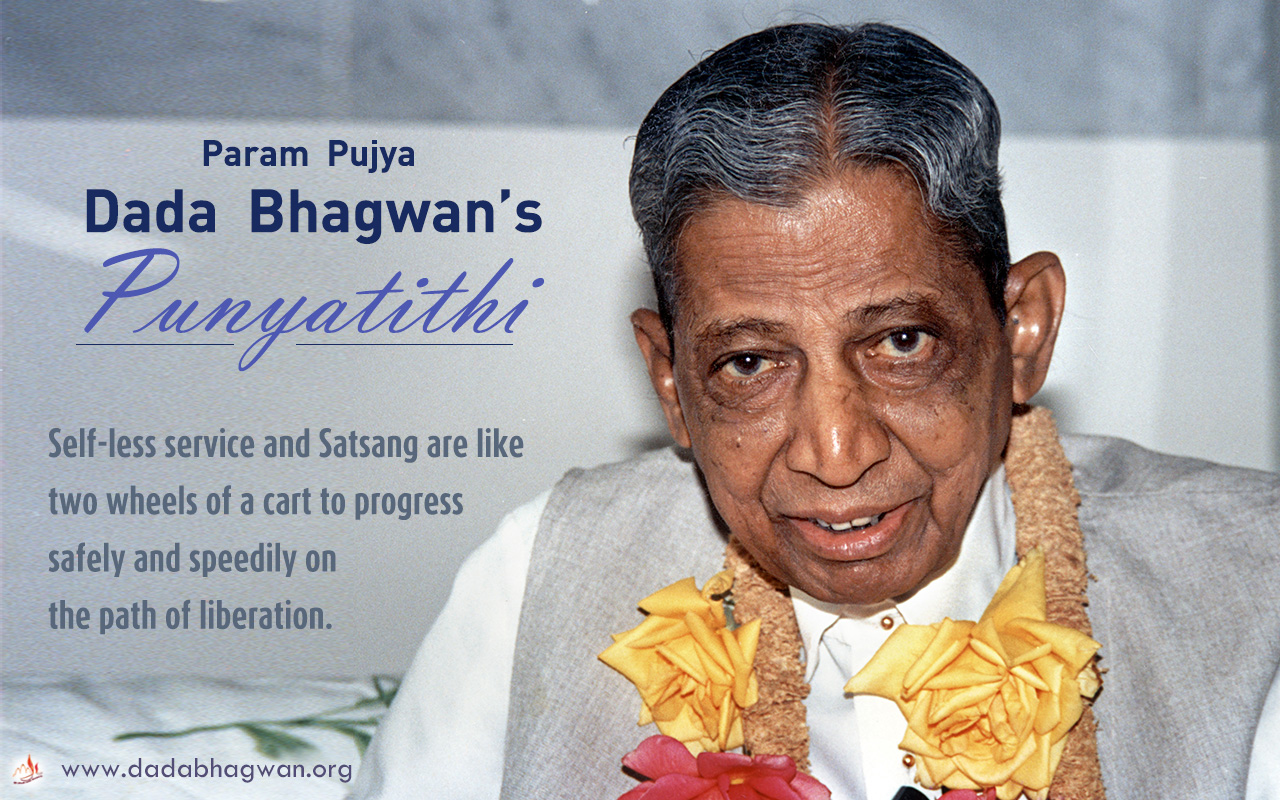 Param Pujya Dada Bhagwan, lived life that of a normal human being; but his understanding was like that of an extraordinary personality. In any given circumstance, he had the ability to arrive at a simple and most basic spiritual extract of the matter, indicating the lofty level of his spiritual development.

In the year 1958, Param Pujya Dadashri attained Self-Realization wherein he experienced the eternal bliss of the Soul. Ever since, he had an intense intent that, “May the entire world attain the happiness that I have attained.” As a result of this humble intent, he obtained the divine power to grace whosoever came to him, seeking the knowledge of the Self, be it a man or a woman, a married person or a celibate, with the vision that helped one attain Self-Realization, in just about two hours (through Gnanvidhi).

He became the living example of having attained Enlightenment, while living the worldly life and rendering his worldly responsibilities, without renouncing the world. Thereafter, he graced millions of people with Self-Realization and illustrated how they too can continue to live their worldly life, render their worldly obligations, and yet progress on the path of liberation by practicing His invaluable commandments, at every step in life. By staying in the company (satsang) of the Enlightened One, one who has the right intentions will begin to learn how to practice his given commandments.

Thus, Param Pujya Dadashri made it easy for the common man, living in this declining era of Kaliyug, to attain Self-Realization and then, through Seva and Satsang progress on the path of liberation.

In 1987, as Param Pujya Dadashri realized that it is time for him to leave his mortal body now, he bestowed special spiritual powers onto Pujya Niruma and Pujya Deepakbhai to continue the work of salvation of mankind. He said, “After I leave, will there not be a need for them? People of future generations will need this path, won’t they?” Oh, what compassion?!

Pujya Deepakbhai, who is the living Gnani today, while narrating his own experience on this path, says, “The very first time, my brother brought me to Param Pujya Dadashri saying it will help me in studies. I agreed so that I could perform well in my studies. When I went there, after listening to Dada, i was amazed that, “This is something very nice.” Thereafter in June-July, with this responsibility of Seva coming onto me, I started attending Satsang regularly. Staying with Param Pujya Dadashri for a 10 day satsang event thereafter resulted in the kind of transformation from iron to gold within me.”

Gnanis have this divine power to transform our being from that of iron (worldly self full of impurities) to gold (the Pure Soul)! Now, who wouldn’t like such transformation?

So come, let’s pray to God that may we meet the right circumstances that enable us to meet Gnani and we spend the rest of our life doing Seva and Satsang, staying in the lotus feet of such Living Gnani!!! 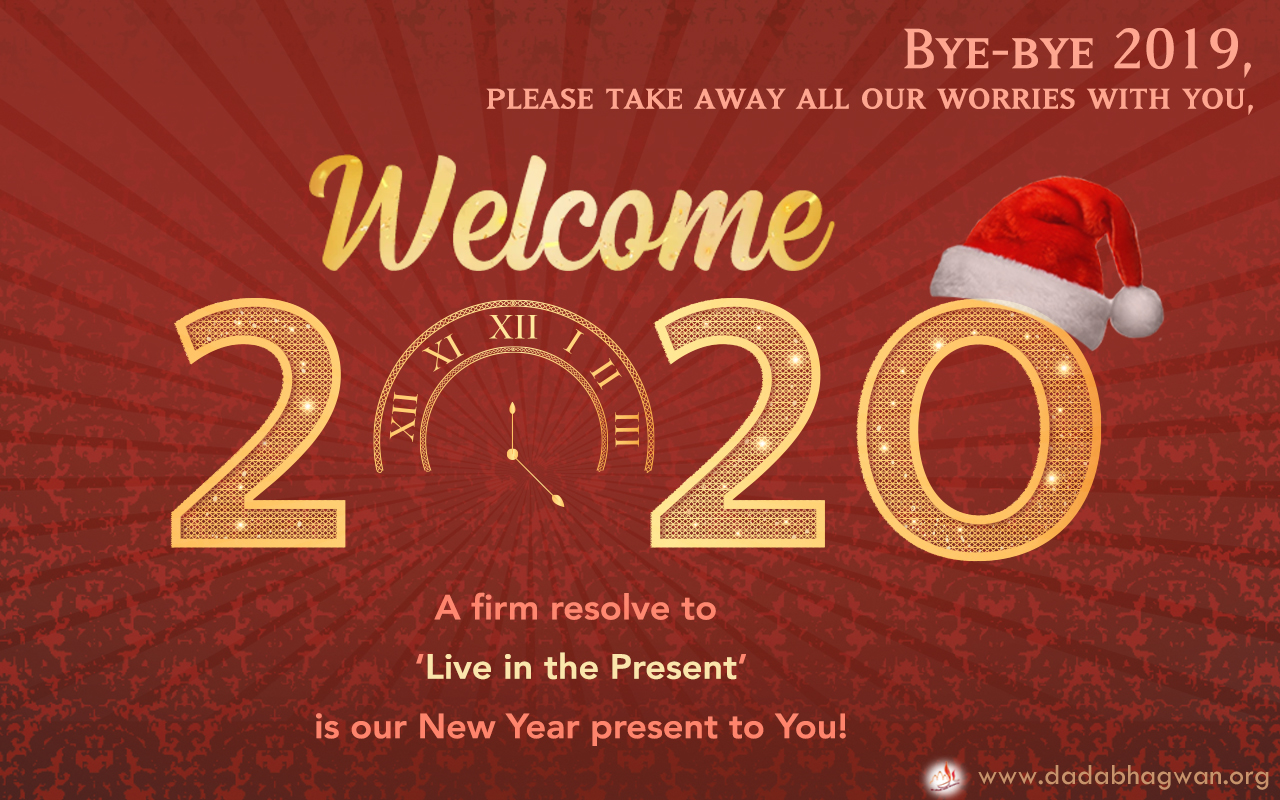 As we approach one more bend on the time scale, it’s time to express enormous gratitude to the wonderful year 2019 that is coming to an end. The year is like a basket full of varied feelings, that of happiness, joy, faith, inspiration, devotion, and worries too! So as we are about to take a leap into the New Year 2020, lets pick the one thing from our life basket that’s been pulling us down on our graph of progress and humbly request 2019 to carry it along as it leaves, so that we can have a joyful 2020.

What is that thing?

It is worries. So firstly, let’s understand why is it very important to give this thing away?

Param Pujya Dada Bhagwan explains, “Worry is a fire. One becomes consumed with anxieties that something bad may happen. To worry implies taking the matter into your own hands.”

To accomplish any task, Nature tells us, ‘do put forth tremendous effort to accomplish the task, but do not worry for it.’ Because when we worry about a task on hand, our effort gets affected, and in the process many a times we ruin the task. Consequently, we suffer by giving ourselves a dual punishment – 1. Our task gets ruined and 2. The grief of mourning we go through.

To help reduce this suffering, Param Pujya Dadashri explains by means of an example,” I tell people that if a thief robs you of five thousand rupees, you should realize that it was appropriate and just move on. The first punishment is an effect of your past life karma. And therefore it is appropriate to remember that “whatever happens is correct”.

Param Pujya Dadashri explains, “Nothing in this world is worth worrying about, not even for a second!” One must learn to face the entanglements that come your way and find solutions to them.

What should we do to end our worries?

Stay in satsang (stay in the company of the Enlightened One).

So, strive to find the right satsang. And until you get the right satsang, whatever life gives you, enjoy it. Enjoy whatever comes forth before you. In other words, learn to live in the present and do not worry about what is not present.

So come let us all embrace the year 2020 by presenting a New Year present of our firm resolve to ‘Live in the Present’, from our end!! 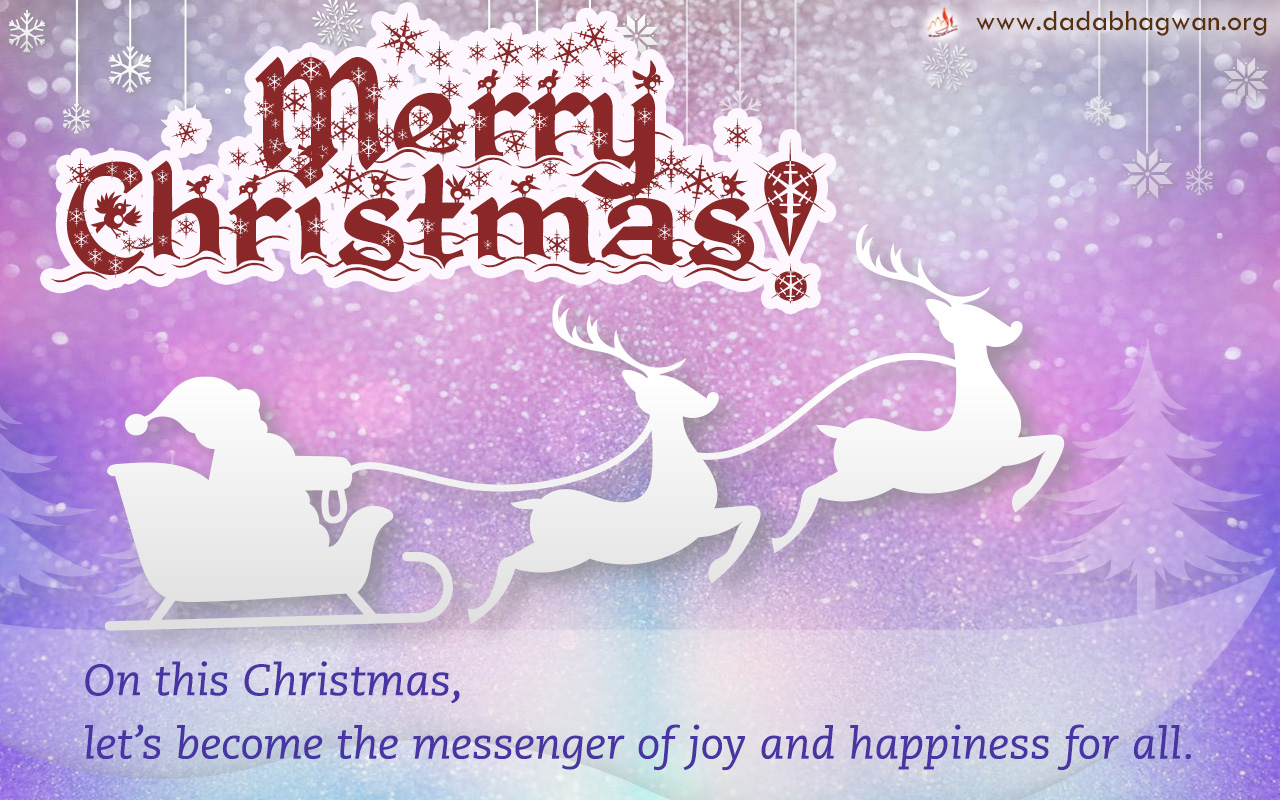 Hey! Did you see that man in the red dress, having a long flowing white beard, with a sack on his shoulders, singing and dancing away merrily to a familiar tune. Yeah! It’s none other than our dear Santa Claus, who’s come with loads of gifts and surprises for all. After all, it’s Christmas time! Time to celebrate and rejoice with our loved ones. But why do we need a special occasion to enjoy with our dear ones?

Although we all yearn to spend quality time with our friends and family, unfortunately things do not always turn out as we want them to be. We want to be at peace with everyone, yet conflicts invariably arise due to difference of opinions. Our inability to understand the other person’s viewpoint leads us into clashing over petty matters.

External conflicts or raudradhyan means to cause any kind of hurt to others. This is caused through various ways like hurting others by our speech, taking advantage of people with lesser intelligence, being violent, etc.

Internal conflicts or aartadhyan means to hurt one’s own self. Although our innate nature is happiness, we often end up hurting our self by worrying about small things, becoming sad by comparing ourselves with others, taking unnecessary stress, or getting into self-negativity, etc.

These conflicts not only affect our relationship with others but they also inhibit our spiritual progress. Yet, from the moment we get up in the morning till the time we sleep, unknowingly, we remain engaged in either of these conflicts.

How can one avoid conflicts?

So come, on this Christmas, let us try one experiment?

Let’s decide that, ‘I do not want to get into any conflicts with anyone.’

Here are some techniques that will help you avoid conflicts –

To begin with, you can try this experiment for a week. And if it works out well, you may continue doing it for the entire year too? So, are you ready to take up the challenge?

Just as Santa Claus spreads love and joy to all, on this Christmas, let us also strive to become a Santa for our loved ones and spread joy and happiness from our goodie bags with everyone!!

Self Realization Ceremony In Morbi, India 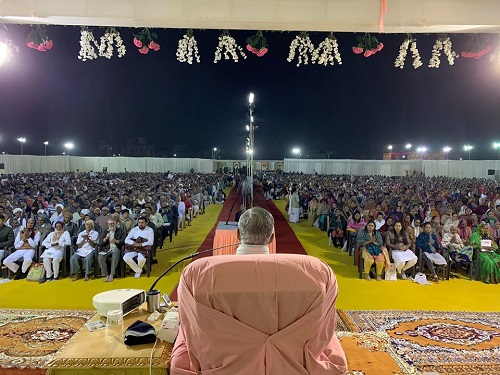